Born in Massachusetts and a product of the suburban Boston School System (for which I am thankful), currently residing in Littleton, NH, my musical avocation started out at age 14 when I discovered with astonishment that I could play the notes to "Louie, Louie" on one string of my sister's extreme budget nylon-string. I eagerly procured tutorial books and avidly tape recorded The Stones, The Beatles, The Beach Boys and many mid-sixties pop classics (on somewhat staticky AM radio) for play-by-ear emulation....

Prior to my pop music phase, I had seen, heard, and was awestruck by a pipe organist at a choral performance in a large hall. I wanted to play a loud, large keyboard instrument, preferably with one with lots of buttons & sliders (for whatever arcane tonal manipulations they might produce). I wore out my favorite record, George Wright at the Mighty Wurlitzer, and fantasized myself as a mad organist wowing the masses with flamboyant keyboard pyrotechnics. But, the pipe dream remained just that. 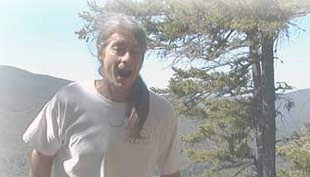 Summer of 1965 was spent cleaning out a century-old barn and its epic junk accumulation with the aim of earning $110 for a Teisco electric guitar, available from Sears Roebuck. I single-handedly dispatched the mess, got the guitar and joined with schoolmates to form the eminently forgettable rock band Atomic Frog. Our highlight: performing for inmates at Massachusetts State Reformatory in Concord (now Massachusetts Correctional Institution - Concord). Our lowlight: Second-to-last place in a 3-town Battle of the Bands (8 bands in contention).

Saying goodbye to high school & jejune fantasies, and hello to higher cultural awareness at UNH, I sold my Teisco and picked up an acoustic steel string. Lacking venues, musical friends, or much talent, I let the instrument lie idly for a few years, until I heard some simple classical guitar tunes played by a music student in her dorm room. I was already a fan of Bach, Haydn, Mozart and Copland, and I had heard that Segovia was self-taught, so I embarked upon a determinedly auto-didactic if only sporadically rigorous path to master classical technique on my steel string.

I was very fortunate to stumble upon the excellent series of instructional books by Frederick Noad, which I must highly recommend to aspiring autodidacts.

Soon enough it was clear that nylon strings were the way to go if the elaborate prestidigitations of Classical Guitar were to be practicable. Trading Steel for Nylon I forged onward, and then one day a few years later while I was working at the (now defunct) Paperback Booksmith, proprietor M. Miller cued up an LP of Walter Gerwig playing J.S. Bach, on what I later learned was a Renaissance Lute. The sophisication & elegance of the sound floored me, despite or perhaps because of the oddness of playing Baroque music on a Renaissance instrument. 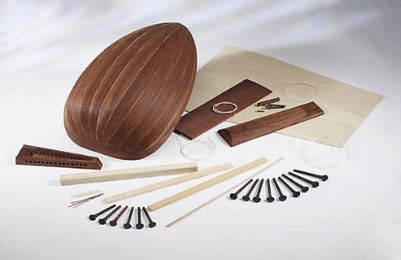 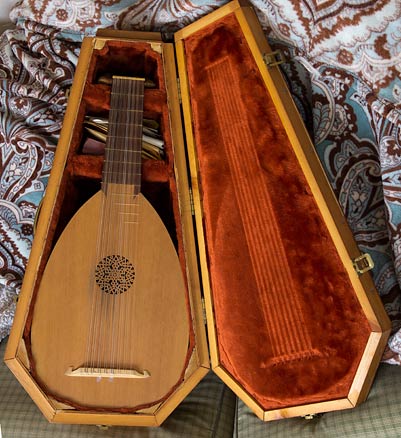 Lute (asssembled from kit in 1979) in handmade case

I tuned the guitar G-string down to F# and learned lute tablature. A few years later, in 1979, I joined The Lute Society of America and also found out that Do-It-Yourself Lute "Kits" were available by mail. I sent in my $300 money order, bought a wood plane, saws, hide glue and shellac and soon received a package (quite similar to the 8 Course Renaissance Lute Kit, pictured ). Assembly was a push on the envelope of my quasi-intermediate woodworking skills, but what emerged was an astonishingly light & decent-sounding instrument, responsive to subtlety & nuance. I designed, over-engineered & built an earthquake-proof padded plywood case in which the well-preserved instrument nests today.

Shifting enthusiasms between lute & guitar, I asymptotically rose to my level of auto-didactic incompetence (à la the Peter Principle) in disconcertingly few years. Yet I assumed ersatz bravado and daringly plunged into the background music performance scene, playing at occasional weddings and events over the span of a couple of decades, to generally favorable reviews.